Lithium-ion batteries are powering our renewable future – but in embracing the benefits of battery storage, we could be setting ourselves up for another big environmental challenge.

By powering electric vehicles and enabling the storage of renewable energy, lithium-ion batteries have become indispensable, and they’re only going to become more commonplace. The International Energy Agency’s Global Electric Vehicle Outlook 2021 projects that the number of electric cars, buses, vans and heavy trucks on roads is expected to hit 145 million by 2030, up from 11 million last year. If governments ramp up their efforts to meet international energy and climate goals, that number could rise as high as 230 million by 2030.

Even in Australia, where EV uptake has been relatively slow – EV sales accounted for less than 1 per cent of total car sales in 2020 – the Australian Renewable Energy Agency has forecast that price parity between EVs and traditional internal combustion vehicles could be achieved around 2024, after which EV sales should rapidly increase.

Similarly, stationary batteries will continue to gather momentum because of the widespread adoption of variable renewable energy sources like solar and wind power. Because these resources can’t be stockpiled like coal, batteries – both for grid storage and household use – will be essential for storing energy at times of low demand and dispatching it at times of peak demand.

Lithium-ion batteries are, by far, the most commonly used for storing electricity. Originally used for things like smart phones, tablets and laptops, they found their way into electric cars with the production of the first Tesla Roadster in 2008, and they’ve become ubiquitous since then, primarily because they offer superior energy-to-weight performance compared to other battery types.

This presents obvious opportunities for Australia, as the world’s largest exporter of lithium, but it also presents a significant challenge. Only about 2% of lithium-ion batteries are recycled, with the other 98% eventually ending up in landfill, where their cells can release problematic toxins.

BloombergNEF’s Electric Vehicle Outlook predicts that the global stockpile of used lithium-ion EV batteries will exceed 3.4 million by 2025 – a massive number, even without taking stationary batteries into consideration.

Dominic Spooner, founder and director of battery casing start-up Vaulta, says the problem is that while battery technology is advancing rapidly, battery case technology has been left behind, rendering recycling near non-existent.

“It’s cost-prohibitive to recycle batteries and give them second, third and fourth lives,” he says, “because battery cases are expensive and dangerous to dismantle.

“They’re not designed to be disassembled. The cell tabs are welded together, and you have to actually break the welds to take them apart, which does permanent deformation to the cells.”

Vaulta R&D engineer Jerome Douven says the recycling issue is an unintended side effect of an otherwise noble move away from fossil fuels – but one that could have serious consequences.

“We’re doing the right thing by moving towards renewable energy sources and pairing them with batteries,” he says, “but we’re creating another problem if we don’t have a solution to recycle these batteries when they reach the end of their life 10 years from now.

“Battery use is only just starting to rise. We’re still at the bottom of where the curve is going to be. The uptake of batteries is going to significantly increase in the next 10 years, and most of them won’t have any sort of recycle plan. As that demand for batteries increases, the problem is going to become exponential.”

At the moment, when lithium-ion batteries are recycled, it’s primarily the metals in the cathode – including cobalt and nickel – that recyclers are after, because lithium and graphite are available too cheaply to make these materials worth saving.

To get to that cobalt and nickel, recyclers use either pyrometallurgy – an energy-intensive method in which cells are shredded and burned – or hydrometallurgy, which involves dunking a battery into a pool of acid that essentially turns it into a chemical soup. Both methods produce waste and greenhouse gases, and with battery makers shifting away from cobalt because of its cost, even these rudimentary forms of recycling might soon be on the scrapheap.

The ideal solution is to recycle batteries directly, rather than melting them down into parts, and give them a second life. An EV battery, for instance, retains 70 to 80 per cent of its original capacity, even after years on the road – and while that’s not enough to continue powering an EV, it’s more than enough for less demanding applications like renewable energy storage.

There are a variety of EV manufacturers that are exploring ways to use EV batteries for residential, commercial and grid-scale storage. Nissan is using old EV batteries to provide back-up power to Amsterdam Arena; Toyota is installing ex-EV batteries outside Japanese convenience stores to pair with solar panels; and Renault is repurposing its batteries in Powervault home energy storage units.

But this won’t become a common enough practice to make a significant difference to those piles of landfill until the process of safely extracting batteries from their casing is made much easier.

That’s why Vaulta is focusing on superior and sustainable battery case technology. Founder Dominic Spooner says Vaulta’s no-weld design preserves the structural integrity of battery cells, so they can be reused, recycled and reconfigured as needed, rather than being dumped.

“Because we’re not welding the cells,” he explains, “when they come out of that casing they have the same properties as when they went in, and they are better set up for reuse scenarios.”

Not only do the cases preserve the cells for reuse, but engineer Jerome Douven says the cases themselves can also be reused.

“When the battery has finished its first life, in the first application it was designed for, then the battery can be disassembled, the cells can come out of the case, and they can go onto a secondary application that demands less power,” he says.

“That same case can then be re-used with newer battery cells for the same application. Even if a newer, better and faster battery cell has come along in the meantime, it can go in the same case, because it’s easy to reconfigure.”

Spooner says Vaulta’s battery case technology is helping to solve the issue of battery wastage before most people even realise it’s a problem.

“Without better battery casing, we’re going to have a real problem with the longer-term aspects of how the industry works,” he says. “Relying on batteries that end up in landfill en masse is not a sustainable way to roll out renewables. People are going to become frustrated with battery manufacturers, just like they are now with the coal industry.

“We have the opportunity to get this right before the problem hits hard. We can solve this right now. And Vaulta is doing that.” 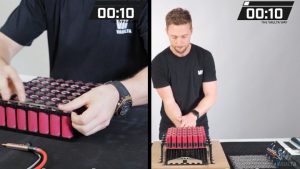 A manual battery assembly race: The typical way vs. the Vaulta way

THE PROBLEM Manual assembly of batteries is a tedious task. The typical design involves extensive welding which has been convenient in the past, but hinders 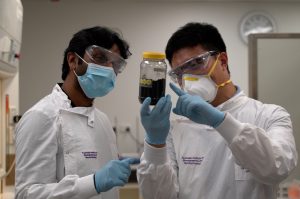 From tiny button cells to grid-scale storage systems the size of football fields, batteries are set to become major contributors to Australia’s economy – and 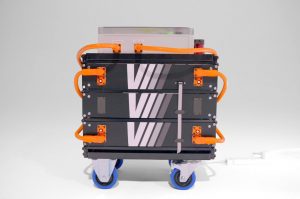 The Problem Battery technology has advanced rapidly. But battery case technology has been left behind. The cost of recycling batteries and giving them second, third